For centuries gravity has been both understood and unexplained... until now.

“If you wish to make apple pie from scratch, you must first create the universe”

Carl Sagan’s assertion is no truer than when facing the question of gravity.

What you are about to read is no doubt a stunning example of the Dunning-Kruger Effect. That is, that I have done so little actual study of theoretical physics that I am unaware of the extraordinary magintude of my ignorance on the subject. Nonetheless, I will go forth with the confidence of a tone-deaf X-Factor participant.

Gravity is a key missing piece in the quest for a Grand Unified Theory and because no one seems to know where it comes from, it is closely related to the question “why is there something rather than nothing” or better formulated; “Why is there order rather than chaos?”.

There are two options:

The first requires little explanation and yields no further information about the nature of the universe. My intention is to explain the second, in that the emergence of gravity is the journey from chaos to order. And indeed, I stumbled on this question not out of burning curiousity about gravity, but by trying to create a logically coherent model of how something could come from nothing; the philosophical materialist’s foundational dilemma. I came up with something that didn’t result in my brain imploding, so I was pretty satisfied with that. Of course, as mentioned, I was trying to do so with no physics education. So, I enrolled the help of Lawrence Krauss, in as much as I watched some of his lectures on youtube. I highly recommend watching his talk.

Laurence Krauss - A Unverse From Nothing

Two things occurred to me when watching

Krauss provides a great deal of food for thought. One challenge he presents is, after showing that the percentage of matter to empty space is 30/70 he says “If someone tells you they know why the percentage is this way they are lying”. So, I’ll take a stab at this later, hey, I’m bullshitting already, I have no fear of being accused of lying.

Krauss also makes a nod to the problematic nature of “Nothing” stating “Philosophers and theologians know a lot about nothing [lols] and require you to talk about it in the way they like”. If you are feeling masochistic and want to know how philosophers talk about “nothing” try Heidegger’s essay What is Metaphysics?

And it turns out that the nothing of physics, that being the emptiness of space is actually a bubbling brew of quantum fluctuations popping in and out of existence (well, not quite, but we’ll get to that). So let us take that to be nothing. This aligns with the philosophical nothing, that is better expressed as chaos, something immeasurable and unobservable.

The void, nothing, chaos by definition is not limited (as any limit would be an assertion of order). So, pure randomness can create anything, infact given infinite time scales it can create incredibly complex things, because it is random - it can become anything at all. It can even create order, but then you might say “but then it is no longer random” and you would be correct. This is not a problem, because we are not trying to prove the existence of nothing, we are trying to understand the existence of something from nothing. With this conception of nothing, given enough time (time-based language used loosely) something (some order) will inevitably arise.

But what something? Well, Ockham’s Razor would state that before something complex arises, a number of less complex things will arise. For the same reason that on a roulette wheel you will almost definitely land on black twice in a row at some point before you land on red 1000 times in a row, or monkeys on typewriters will write “the” before they write the entire works of Shakespeare.

So what we are looking for is the simplest form of self-ordering. And as soon as we have any simple self-ordering process, order can grow indefinitely. This might be something that self-replicates, or behaves in a consistent pattern.

So, what is the simplest thing that might self-order? How about a very weak force that draws points together… Wait that’s cheating right? That’s simply positing the thing we’re trying to explain (Gravity). To explain that we need to find something even simpler.

How do we make something simple even simpler? We eliminate specifications.

So what are we left with

During this process I made a much more simple simulation (not shown here) in which each point was randomly attracted or repelled by all other points uniformly. This had the predictable result that half of the points came together into gravitational bodies and the rest spread out. Which did serve as a proof of concept that random allocation of force would necessarily create the illusion of gravity.

Later I would run into this video...

In the video Verlinde describes a new theory of gravity that supported a my assumption that gravity is not a force, but a byproduct of multiple different micro-forces. It was quite exciting, because I had at first thought there might be one of those annoying “facts” or “observations” in physics that made my position impossible from the outset. But apparently not.

But this was much too simple, which brings us to the simulation above. Hopefully you’ve had a play with it. It’s pretty easy to operate. Select the number of colours you want in the system and click on the number.

Each coloured point is given a random position and a random degree of attraction or repulsion to each other colour. For example each red point might be pushed weakly away from each yellow, but drawn strongly to each blue.

One observation that came from the simulation that I hadn’t expected was just how uniquely designed these systems would feel. The systems could be completely static or very volatile with continuous movement within the system, but they demonstrated some form of complex order.

It got me thinking that these systems might actually relate more closely to the zero dimensional objects we already know of; electrons, which, once bonded in an atom, demonstrate a high level of complex order be it static or volatile.

So, did I just explain the origin of atoms? More or less.

While these visible systems are all very interesting, what about the repulsive colours just floating around in space? Well, let’s remember, they are not floating, they are actively repelling points around them, resulting in force that does not appear to have any matter associated with it, because zero dimensional things are not easily detectable unless they fall into a pattern with others (like in the form of an atom) and due to their repulsive quality they are very far-spaced.

Now we know from Krauss that there is a lot of unaccounted for energy and evidence of forces other than “sucking” gravity. We have detected energy between material systems and it aligns with what you would expect from these repulsive points. What’s more, like the active gravitational bodies, these would not necessarily be static. They may be being propelled by opposing forces into different types of fields or waves (invisible force shapes).

So, as mentioned above, this bubbling brew of empty space is not exactly “nothing” it could be a byproduct of the ordering processes that have coalesced into matter. Empty space, in this model is actually repulsive energy. Now foolishly continuing to try to link this nonsense to actual physics, I would hazard a guess that dark energy would simply be the vastly spaced points that are strongly repellent to most or all other points and themselves. Because of this repellent nature they would never group into visible forms and hence their influence on surrounding matter would appear to come out of the dark (While we’re at it, this might yield a similar explanation for anti-matter).

In the same way the sorts of quanta we can observe in the world are exactly the type of quanta that behave predictably when in groups, if they weren’t they would be long gone, which reminds me of the weak anthropic principle. So, what happens is that every self-balancing and stable system survives.

So, when we planets fall into orbit around a dominant  cluster with a high sum attraction (the solar system) they create something stable and measurable, or when electrons repel themselves but are attracted to protons they create something that is stable (a particle) and survive. That which coalesces, contributes to an average attraction and creates a “constant force” (gravity) which will tend towards a number that represents what average sum attraction is required to coalesce. Therefore the force is bottom up creation rather than a top down rule.

This will give the illusion that there is a measurable force of gravity.

When divided like this, you should expect that directly observable systems should only make up around a 25-33% of the force in the universe. So, the 30/70 proportion is simply a reflection of the difficulty of measuring different types of systems.

I could go on (and on and on) and plan to do so in the devlog. But for now, I hope you have enjoyed this wild, uninformed rant about a field I have no right to have an opinion about. I don’t expect I have provided any answers here, but this process has certainly raised a lot of questions for me at least about the cosmos and my own sanity.

I welcome comments from theoretical physicists and fellow luddites alike.

Cool idea. Better than the supposition that random (gravitational) mass appeared and this forms the basis for the ebbs and flows of the universe.

Thanks. The main thing a wanted to confirm was that, without any fine-tuning, structure came from randomness in basically every case. Now with the new build (there was a bug with the last one) I think it's reflecting the microscopic world more so than the macro. Some of them even look like a Bacterial Flagellum, which is one of those complex forms that creationists believe required "Intelligent Design". 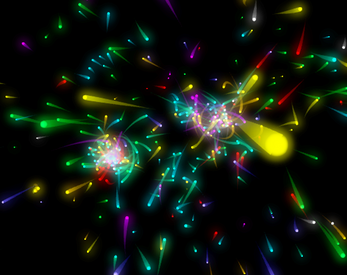